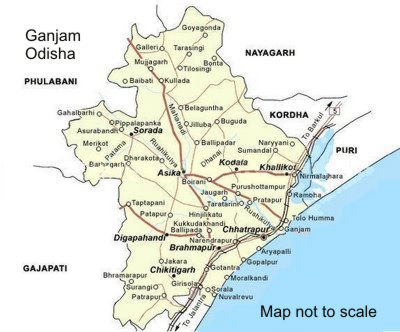 Ganjam is one of the most populous districts of Odisha and a under developed district having twenty-two blocks and three sub-divisions. It is situated in the coastal region of the state and shares its boundary with Andhra Pradesh State. Gifted with water resources, forests, flora and fauna, and other natural resources the district put on view its richness in various areas.

Land Resources : Ganjam district has total geographical area of 8070.6 Sq. Kilometers. The costal area of the district extends over 60 kilometers. So far as the river system is concerned, rivers like Rushikulya, Dhanei, Bahuda, Ghoda Hada play major role in agriculture and power sectors of the district.

Occupation: Cultivation is one of the major occupational labor forces of the district, which has engaged approximately 75% of the total workers of the district. Livestock, Forestry, Fishing, Mining, Construction, Trading and Transport are few of the work-related categories being the source of income for another 22% workers. The major crops grown in the district are paddy, groundnut, cotton, sugarcane and green vegetables. The district has a prosperous live stock population and potentially very much rich in inland and brackish water fisheries. The Chilika coastal area and extended sea shore are the source of rich marine products in the district and serves for the production of like shells, salt.

Handicraft and Cottage Industries: The district has own international reputation for its cottage industries and handicrafts. The main crafts are Brass, appliqué, bamboo craft, stone carving, wood carving, terracotta, textile toys etc. and thousands of artisans are operating individually and through co-operative societies.