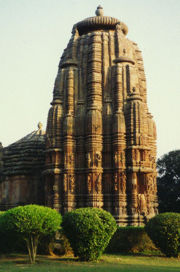 A small but plentifully decorated shrine of Lord Shiva, Parasurameswara Temple was constructed in 7th century A.D. This temple is a unique portrait of the most effusive elements of Orissa style of temple architecture.

It denotes early stages of development of the two vital Orissan temple components (1) The traditional Deul (the beehive-shaped tower) and (2) and the porch in front of the tower (called the Jagamohan).

Although this is a Shiva temple, interestingly it also dotted with Vedic nature deities of Vishnu, Indra, Surya and Yama and a group of seven mother Goddesses. The verdant sculptures of animals, amorous couples and floral illustrate the magnitude of divinity in India. The outer walls demonstrate beautiful carvings of Lord Shiva, Lord Ganesh, Goddess Parvati, and other Hindu Gods. The beautiful carvings depict mythological stories excessively. It was repaired in 1903, however its original form is substantially intact.