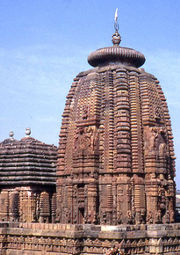 The 950 A.D. Mukteswara Temple, dedicated to Lord Shiva in Bhubaneswar

Mukteshwara temple is one of the most outstanding temples of Bhubaneswar city. The small yet well-designed temple was built in the year 950 AD, in a style which is similar to that of “Kalinga School of Temple Architecture”. Because of its refined structure it is termed as “Miniature gem of Orissan architecture”. Almost all of the sculptures on the temple are magnificent.

The temple is dedicated to Shiva, Mukteshwara, meaning “The Lord who bestows freedom through yoga”

With a perfect concept and combination of many elements of early and later phase of Kalinga school of temple architecture, the temple exhibits the charismatic outlook of the vicinity.

The arched gateway of Mukteswara temple needs particular focus for its amazing beautiful sculpture, and delicate decorative details. The temple elaborates and exhibits carvings of charming female figures, monkeys, peacocks, the mythical lion head with open jaws, Goddess Saraswati sitting on a lotus with two female attendants by her side and Lord Ganesh with his attendant mouse. More importantly the walls place Buddhist and Jain images as well as Hindu symbolic.