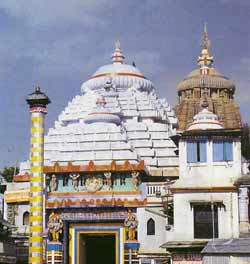 The Jagannath Temple in Puri is a famous Hindu temple dedicated to Jagannath (Krishna) and located in the coastal town of Puri in the state of Orissa, India. The temple is a main pilgrimage destination for Hindu devotee, predominantly worshippers of Krishna and Vishnu. Jagannath Temple, also known as Jagannath Dham is part of the Char Dham pilgrimages that a Hindu has to be visited in one’s lifetime.

The temple is famous for its annual Rath Yatra, or chariot festival, in which the three main temple deities are hauled on huge and elaborately decorated chariots.

The huge temple complex covers an area of over 400,000 square feet. It contains at least 120 temples and shrines.

The construction of the Current Jagannath temple was initiated by the ruler of Kalinga, Anantavarman Chodaganga Dev. In the year 1174 CE that the Orissan ruler Ananga Bhima Deva rebuilt the temple to give its present status. Subsequently, when Ramachandra Deb established an independent kingdom at Khurda in Orissa, the temple was consecrated and the deities reinstalled.

To reach Jagannath Puri: Puri doesn’t have its own airport. By air, Bhubaneswar is its nearest airport, and for train journey puri is the nearest rail terminious on southeastern railways which connect the city to other parts of India. Due to the importance of the place, it is well connected to other parts of the country by extensive network of roads.