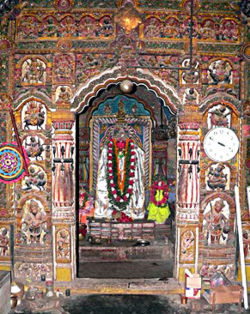 The temple is located in the Badadanda sahi of a small town Buguda at 1/2 km south-west of Palasara chowk. Nearest major Railway Station is Berhampur.

The two-armed Surya (sun) God standing on a chariot is kept over a platform. The temple is prominent for its wood carvings and wall paintings signifying the stories of Ramayana, Krishnalila, Sita-vivaha, Bali vadha, Setubandha-nirmana, Mayamirga-vadha, Rama-Ravana yudha etc. Other things that could be noted in the temple are the ten incarnation of Lord Vishnu Kanchiabhijana (the most popular stories related to Jagannath and king of Puri) Major festivals like Makara Sankranti, Sambadasami, Magha Saptami, Ramnavami, Janmastam, etc. are observed in temple with great interest.

This temple is expected to be built in 1790 A.D., during the rule of the Bhanjas of ex- Ghumsar state(king Srikara Bhanja). It is reported that God Biranchinarayan who is the prime holy being of this temple was recovered from the ruins of Malatigarh, consequently the image was carried to Buguda and the new temple was constructed. Afterward the temple became famous as Biranchinarayan Temple.

Material that are used for the construction of the temple are Khandolite stone and lime plaste and it is build in Ashlar masonry building technique.

The district headquarter is at 92 kms. and state capital at 180 kms. from Biranchi Narayan Temple.