The most impressive Yogini temple in Odisha belonging to 9th Century CE, in Odisha” 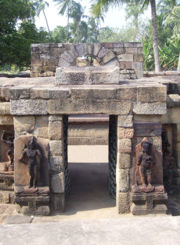 The most impressive Yogini temple in Odisha belongs to 9th Century CE and is located at Hirapur in Khurda district, 15 km south-east of Bhubaneswar city. It is a small, circular and hypaethral (ancient temple with no roof) temple that houses 64 Yogini images. Hirapur Yogini temple is second of its kind in Odisha and one of the four similar exceptional temples in India. All Yogini images are in standing posture and with their vehicles. The structural design of this temple is unlike the other major Orissan architecture.